With construction of Brisbane’s second runway due to be completed in May 2020, speculation is increasing about what that means for noise in the suburbs.

Brisbane Airport Corporation has created an online tool  to help residents to determine if planes will cross above their backyards.

You can search your address on the online Brisbane Flight Tool.

The Brisbane Airport Flight Tool maps the paths in and out of the new strip, along with noise, weather impacts and times when planes are planned to operate.

Work began on the $1.3 billion runway in 2012 and work is set to be finished by early next year.

However it is expected that residents in 10 other suburbs will be under the flight path for the first time: Upper Kedron, Albany Creek, Bridgeman Downs, Banyo, Nudgee, Bald Hills, Strathpine, Bray Park, Lawnton and Joyner.

You can search your address on the online Brisbane Flight Tool.

PHOTO: The new runway is on the western side of the terminal building. (Supplied: BAC)

“The new flight paths will start in May next year, and we want people to be aware that the new runway will mean changes to the flight paths,” he said.

“Areas off the end of the new runway will see aircraft departing south, flying over Hamilton and Portside where the new river development is.

“They will then fly over Bulimba and New Farm before turning back to the city before approaching St Lucia.” 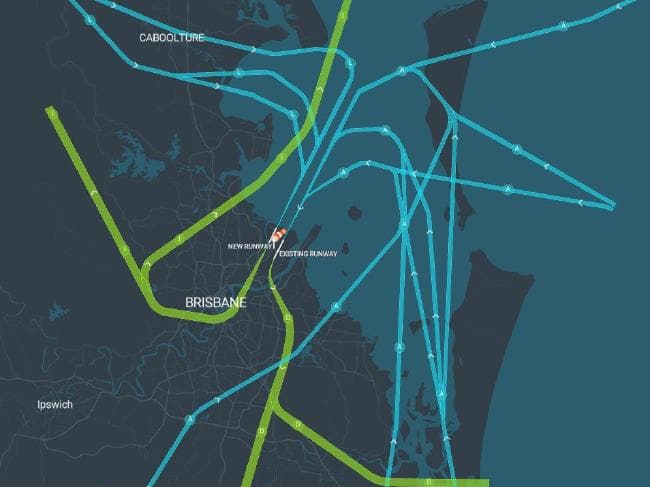 “The map is indicative of the air traffic control … generally 80 or 90 per cent of aircraft will be on the flight path tool,” Mr Hall said.

Despite alarm from some, Brisbane Airport Corporation spokeswoman said most flights would be at high altitudes and aircraft noise was “unlikely to be noticeable”.  Flights would be directed over the bay as much as possible 10pm – 6am.

The new suburbs in the flight path, will “experience departures which will be between 10,000 and 20,000 feet over these suburbs and should not be noticeable as background noise levels will generally be higher than aircraft noise,” the spokeswoman said.

“There won’t be any changes initially with the number of aircraft, it will increase over time to about a 3 per cent increase,” Mr Hall said.

“It puts Brisbane in a good position for the future, but it will take about 30 years to reach that capacity.”